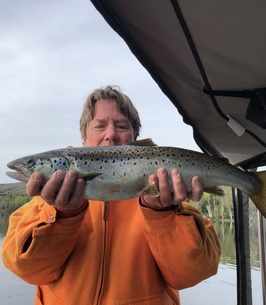 New Vineyard - Wilfred Daggett Jr, 43, of New Vineyard died unexpectedly on Jun 10, 2022. He was predeceased by his wife, Collette Daggett.

Wilfred also known by the nickname of “Will”, born on September 13, 1978, son of Theressa Savage, and Wilfred Daggett Sr in Farmington, Maine. He married his wife, Collette Daggett in 1999 and they shared four children together. Will is survived by his three daughters after his predeceased wife; Jocelyn, Katelyn and Karalyn Daggett. He is also survived by his beloved grandchild Waylon Whitney, and Jocelyn’s fiance`, Christian Whitney.

Will attended Mt. Blue High School and graduated a year early. He was also a graduate from KV Tech with an associates degree. Growing up Will found his passion for fishing, hunting, and trapping. Will was a coach for the New Vineyard Mets baseball team for multiple years.

Will was a lineman and master electrician for TDS Telecom for 20+ years, and was very dedicated to his job. Throughout his adulthood he loved sharing his love of the outdoors, he would take his children out trapping for beavers, and hold his girls between his lap while fly fishing. His ultimate favorite was being able to take 3 of his daughters and his wife deer hunting, and would light up in the face once they were able to lay one on the ground, he wouldn’t stop talking about it. Will was a provider for his family. He taught his children the source of sacrificing any animal in order to help provide for their family. This was very important to him in making sure his kids understood the true meaning behind his culture.

During his marriage Will and Collette liked to share their love of snowshoeing to Collette’s She-Shed. They also enjoyed taking their motorcycle for rides on Sundays, and side by side rides exploring their properties. Will and Collette liked to bring their children to their beloved camp in Ohio where they took their girls hunting. Will and Collette also shared a grandson, Waylon, whom they loved dearly. Will was known as Waylon’s “grumpa” and shared the bond within their daily nap times. Will liked to take Waylon to explore the property, and play with his dogs, especially his youngest dog Tonka.

Will was always there to cheer on his girls at their sporting events and will be missed dearly at KK and Kara’s future events. Will was always willing to give a helping hand whenever needed and cherished his ability to do so. Many people will describe him as “a man who would take his shirt off his back to those in need”. Wilfred will be missed by many fellow fisherman out on Rangeley lake in the upcoming years.

Relatives and friends are invited to a memorial visitation, Thursday from 5-7 pm at the Wiles Remembrance Center, 137 Farmington Falls Road, Farmington where refreshments will be served. Memories and a memorial video may be shared in his Book of Memories at www.wilesrc.com.