To share your memory on the wall of Sally McKinley, sign in using one of the following options:

To send flowers to the family or plant a tree in memory of Sally McKinley (Pickerill), please visit our Heartfelt Sympathies Store.

Receive notifications about information and event scheduling for Sally

There are no events scheduled. You can still show your support by sending flowers directly to the family, or planting a memorial tree in memory of Sally McKinley (Pickerill).
Visit the Heartfelt Sympathies Store

We encourage you to share your most beloved memories of Sally here, so that the family and other loved ones can always see it. You can upload cherished photographs, or share your favorite stories, and can even comment on those shared by others.

Posted Nov 24, 2020 at 07:05am
Debbie, Bobby & Billy~So sorry for the sudden loss of your Mom~My thoughts are with you at this time as well as I am sure my mom sends her condolences~Sal & your father, Bill were great friends of my parents, Alex & Jean Kozlowski having lived on David Rd from 1967 to early 1990's as well as Dad & Bill worked at IP in Jay~
Chris Kozlowski Cuskelly & Jean Kozlowski
Comment Share
Share via:
RF

Tender Tribute was purchased for the family of Sally McKinley. Send Flowers

Posted Nov 23, 2020 at 09:22am
WE want to pass on our deepest sympathies to the McKinley family. We have such great memories of Sally and you all from our time living on Davis Road. Sally was a very kind and caring person that cared deeply for her family and others. Such a tragic accident. We pray for her and all of you in moving through these rough times. We hope that Billy recovers physically very quickly. May you take great comfort in the many years together and the great times! I know we do. 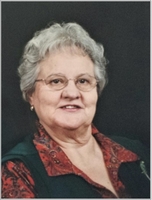