To share your memory on the wall of Roger Page, sign in using one of the following options:

Farmington - Roger Ordway Page of Rangeley, passed peacefully on the evening of October 31st at the age of 96 at Orchard Park Rehabilitation and Living Center, Farmington where he was lovingly cared for by the staff for the past four and a half years. Born in Fitchburg MA, he was the son of Roy and Elsie Ordway Page. He was a graduate of the Senior High School Class of 1942 in Leominster MA.
Roger was predeceased by his wife Patsy after 66 years of marriage. Survivors include his daughters Karen Hawksley (Jeffrey) of Rangeley, and Bettina Cloutier (Marc) of Phillips, grandchildren Patrick Hawksley of Park City UT, Jean-Marc Cloutier (Jennifer Rettig) of Indianapolis IN, Christina Hawksley (Leon Libby) of Rangeley and Alexina Carey (Timothy) of Ipswich MA.
Roger might have become a champion figure skater, for it was as a member of Fitchburg’s Mirror Lake Skating Club, that he developed an early joy in winter sports. His first foray in skiing was on a pair of 7’ 3” skis at Hospital Hill where he would make his downhill rushes and snow-spraying skating stops before the slope went straight down and ended in a state highway. At Roger’s first time skiing at North Conway, a rather sophisticated skier decided that Roger was a menace on the hill and showed him how to snow plow. Roger took his advice but thought that “it slowed him down.”
One wrenched knee later, Roger decided that there was more to skiing than speed and that it might be well to be able to turn in more than one direction. After following a Junior Downhill and Slalom champion from Fitchburg, Page learned to turn both right and left by following him around and in doing so, Roger discovered one of the basic principles of teaching kids to ski - they get the hang of it by watching someone else do it right.
The Pages moved to Leominster in his senior year of high school, and by serendipity, Roger’s new home was within walking distance to a slope that was home of the Leominster Ski Club. He did his first teaching at the Leominster tow. In his mind, he had already formed the idea that one day he was going to run a ski school of his own. After spending time out in the western states to see what skiing was like there, he returned east and was advised if he wanted to learn more about teaching skiing, he should learn more about it and go to Stowe VT. Roger arrived there in 1946 and met with the legendary Sepp Ruschp who told him to come back in December so he could watch Page ski. He did and was immediately hired for the six-man ski school and remained there for 11 years. His life as a ski instructor was jelled.
Roger garnered professional ski instructor certification by the USEASA in 1948. Searching for year-long skiing, he went to Mt. Hood OR and ran the ski school. Returning to Stowe, he met his future wife Patsy Edmiston, from Wilmington DE, who had come north to learn to ski. They were married in 1949. Roger organized and taught in his first junior program sponsored by the Mt. Mansfield Ski Club in 1954, seeing it produce skiers like Billy Kidd. He taught skiing there for the next 12 years.
Knowing Roger’s wish to start his own ski school, a friend suggested he head to Maine, where there were few people envisioning its future as ski country. Roger was offered the post of assistant director of the ski school under Werner Rothbacker at Sugarloaf where he started its first junior program. Within two years, his hope to run his own school came along - Saddleback Mountain in Rangeley. Page was one of the fledgling mountain’s first stock holders and sold stock on the road to get the mountain going. His steady cheerfulness and optimism was a big factor in the early days.
That first year, there wasn’t enough money to start a ski area so the Rangeley Ski Club was formed. A rope tow was put up at the Ellis farm and the Roger Page Ski School went to work teaching the local populace to ski. Saddleback eventually opened on the last day of 1960.
Twice Page served as manager of the ski area. In 1963, Page was appointed to the Professional Ski Instructors Association (PSIA) of Examiners, a position reserved for only the top ski instructors. He was one of six who actually examined the examiners. A level three instructor, he was made a life member of PSIA in 1976.
The Roger Page Ski School and the Roger Page Ski Shop on the mountain and in town were a key part of Saddleback’s history and in developing instructors through his role with PSIA. His presence added to the Saddleback image - a friendly area for family skiing. For his contributions to Maine skiing, Roger Page earned induction into the Maine Ski Hall of Fame in 2004.
The family suggests that those who desire consider memorial contributions in Roger’s memory to the Rangeley Alpine Ski Club - 2742 Main St., Rangeley ME 04970, 207-670-5098 email - rasc.maine.gmail.com or the Rangeley Ski Scholarship Fund (207)864-5671.
A graveside service will be held at the Evergreen Cemetery in Rangeley in the summer of 2021. Memories may be shared in his Book of Memories at www.wilesrc.com. Cremation care and memorial services are being cared for and provided by the Wiles Remembrance Center: Adams~McFarlane Chapel, 137 Farmington Falls Road, Farmington.
Read Less

To send flowers to the family or plant a tree in memory of Roger Page, please visit our Heartfelt Sympathies Store.

Receive notifications about information and event scheduling for Roger

We encourage you to share your most beloved memories of Roger here, so that the family and other loved ones can always see it. You can upload cherished photographs, or share your favorite stories, and can even comment on those shared by others. 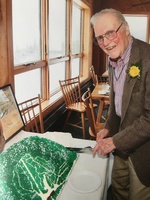