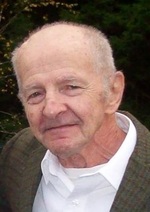 Robert “Bucky” Edwin Dunham, Sr., 82, of Dixfield, died peacefully on December 12, 2020 at Pinnacle Health & Rehab, where he had resided since April of 2019, due to complications of Covid-19.
Bucky was born on November 15, 1938 to J. Willis and Vilda (Hawkes) Dunham of Dixfield.
Bucky married Eleanor Robinson on December 19, 1970. He passed away just one week shy of their 50th wedding anniversary.
Bucky lived in Dixfield for most of his life, graduating from Dixfield High School in the class of 1958. He enjoyed watching the Boston Bruins on television. He liked most sports but hockey was his favorite. He was also a member of the Rumford Senior Citizens and enjoyed going on many day trips with them. While at Pinnacle he enjoyed playing Bingo and listening to the music from visiting players.
Bucky worked at Diamond Brands until they closed and then he went on to work at other places until his retirement. To keep busy he worked at M/T pockets doing odd jobs around the garage after that.
Bucky is survived by his wife. a son Robert (Avery Lancaster) Dunham Jr ; a daughter, Cathy Dunham (Donny Bradley); granddaughter, Melissa Frank (Jordan Thibodeau); three very special great grandsons, Jeremiah, Owen and Kristopher, and son-in-law John Majancsik.
He was predeceased by his parents, brothers, Willis, Fred and Baby Robert Dunham, sisters: Norene Gaudet, Dorothy LaPrell, Maxine Brown and Baby Joyce Dunham.
The family would like to thank all the staff at Pinnacle for the care that Bucky received while at their facility. He loved all of you and he will be greatly missed by everyone that knew him. He was a very special person who never said a bad word about anyone he met.

A graveside memorial service will be held at Greenwood Cemetery in Dixfield in the spring of 2021. Arrangements are cared for by Wiles Remembrance Center 308 Franklin Rd. Jay. Donations may be made in his memory to the Pinnacle Recreation Fund, 26 Pleasant Street, Canton, ME 04221, c/o Becky Knox. A kind word may be left in his Book of Memories at www.wilesrc.com