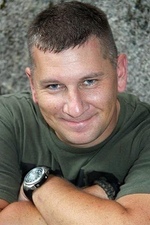 Randy Walker, 46, of Kingfield passed away early Friday Morning, March 5, 2021 at Maine General Medical Center in Augusta. He was born in Waterville, July 22, 1975 the oldest child of Todd and Cheryl Walker. On December 13, 2014 he married his best friend Jessie.

Randy spent 4 years proudly serving his country in the United States Marine Corp. He was a member of the 8th and I drill team while stationed in D.C.
After returning home from the Marine Corp, Randy was hired at Sugarloaf in the Security Department in April of 1999 working under Chief Ron Moody.
Randy ranked highly on leadership skills and commitment to the duties of security and police work.
In 2006 he was promoted to Patrol Supervisor for the department. Upon Chief Moody’s retirement in 2008, Randy was quickly promoted to Deputy Chief under the leadership of the new Chief of Police Scott Nichols. Randy became an employee of the town of Carrabassett Valley in 2013 with the Carrabassett Valley Police Department. He continued in his role as Deputy Chief under Chief Mark Lopez in 2013. Randy retired from law enforcement in August of 2017 to begin his own business.

Randy was highly regarded as a strong presence, good communicator and leader among the security and resort staff. One of his favorite things to do was go fishing and boating in local lakes and streams.

A graveside memorial service will be held this summer and will be determined at a later date. Arrangements are under the care of Wiles Remembrance center: Adams-McFarlane Chapel 137 Farmington Falls Rd. Farmington. Donations may be made in his memory at https://www.foldsofhonor.org/scholarships/. A kind word may be left in his Book of Memories at www.wilesrc.com