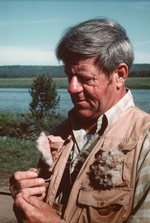 Mauno Ensio Kankainen
1924-2020 -- He lived a good life, with his wife Kay the perfect companion
KINGFIELD -- Mauno Ensio Kankainen died Sept, 17, 2020 at Maplecrest Rehabilitation and Living Center in Madison where he had been living since December of 2018. He died of diastolic heart failure.

"Death is a Door"
By Nancy Byrd Turner
Death is only an old door
Set in a garden wall
On gentle hinges it gives, at dusk
When the thrushes call.

Along the lintel are green leaves
Beyond the light lies still;
Very willing and weary feet
Go over that sill.

There is nothing to trouble any heart;
Nothing to hurt at all.
Death is only a quiet door.
In an old wall.

Mauno experienced many things in his 96 years, what he most wanted to do over the last six months of COVID-19 quarantine was to feel the grass between his toes and to take his great-grandchildren fishing to a secret spot; all 11 of his great-grandchildren.
Mauno would often ask if he still had his fly rod. Mauno still had his first fly fishing reel, which he paid 25 cents to purchase many years before.
One year Mauno had caught the largest brook trout in Maine on a number 10 muddler minnow. A beautiful fish, all six pounds, preserved by David Footer, as a reminder. Mauno often imagined the taxidermist had to have been a very busy man, because Mauno had seen that fish in many different settings. Mauno always had time to go fishing and time to tie flies. One of his major lifetime achievements was to own a piece of land with a trout pond and a small log cabin that he built. The only cabin on the pond.
Mauno's love of the outdoors began as a young boy, born on a hill in Kingfield, Aug. 18, 1924, the son of two immigrant parents of Finnish descent who met in Kingfield. In 1926 the family moved Back to Finland to be with his grandmother on the family farm. Mauno's sister, Pirkko Atwood was born in Finland. The family returned to Kingfield in 1930 and bought a piece of farmland and buildings.
Mauno grew up on the farm, doing what Americans during the depression era were good at doing --surviving. He was very proud of his first bicycle; he could get a lot more done.
Once his mother, Martta told him to not harvest any more deer, she had canned five and that was enough. Mauno began guiding while in high school with Howell McClure, Harold Woodcock and Ashley Parlin. In the spring of 1943, he participated on the Kingfield High School baseball team which won the Franklin County Championship. Part of Kingfield High School, class of 1944 he often told stories about playing ping pong at Stanley High School and running home for lunch. In 2019 Mauno, Howell McClure and Louise Davis Haggerstrom attended the KHS alumni reunion, the three often visited at Maplecrest until the COVID Quarantine began in March.
In World War II he was in the Navy serving in the North Atlantic between Portland, Maine and Newfoundland, Canada. The strange fact was that Mauno always got seasick, when we went deep sea fishing. After being discharged he attended Coyne Electric School in Chicago working in the US Postal Service to support himself while in school.
It was in Chicago that he bought his dancing shoes, which he re-soled many times and still used in his 90's. Returning to Maine he worked for awhile in Southern Maine, and met Katherine Huston, at a dance in Portland.
They were married in Lisbon Falls at Katherine's home and honeymooned in Quebec City. Beginning their life together, they moved to Kingfield, joining Ensio and Martta on the family farm. They began building their home together on a piece of the home farm. Babies were born in 1950, Eric Mauno; in 1951, Michael Edward; in 1952, Karen Grace. Karen Grace died in 1952; she had been born on her mother's birthday.
Kay would often comment that she had running water, while tending three babies in diapers, with Mauno doing the running. In 1954 they completed a modern house with indoor plumbing and central heat, a wood stove. 1954 was the year they began their first business together, Vose Mountain Lodge and camps.
Sugarloaf was just getting started and Mauno was a successful guide in fishing and hunting. They also began selling appliances, and doing electrical work in the expanding tourism business of Sugarloaf. Mauno participated in many public service tasks, serving as treasurer of the Sugarloaf Business Owners association, a member of the town of Kingfield budget committee into his 60's, a trustee of the Kingfield Savings Bank, a town selectman.
In 1961 the next business was the Partnership with Al Bolduc and his wife Dawn, starting "Sugarloaf Ski Specialists" on Main Street in Kingfield. Shortly after having a store front, Mauno put his love of land to use, buying and selling land with his brother- in- law Maynard Atwood. Eventually Mauno became a licensed Real Estate Broker under his Country Realty signs.
There was little time in the busy life except for work, the boys and dancing.
In 1969 when the youngest son graduated from Kingfield High School, Mauno decided it was time to retire to cutting wood, something he loved doing. Cutting wood was a dangerous occupation, he needed a back operation, he suffered a spring pole concussion that required a week in the hospital. His life stayed centered on fishing, hunting, cutting wood, and the Wall Street Journal.
Mauno lived a good life, Kay was the perfect companion for Mauno, a willing business partner, an eager dance partner, and when they both were retired, they embarked on a decade of travel. Dancing was always a part of trips to Hawaii, Salt Lake City, Spain and Finland. They drove regularly to Monson for dances at the Finnish Farmers Club. They attended Finn Fests nearly every year for 20 years. The last Finn Fest he attended was in Northern Michigan in 2013, attending with his two sons Eric and Michael.
Mauno was predeceased, by his daughter, Karen; his wife, Katherine.
A family burial will be had in the future, on the Kankainen family plot, joining his Father Ensio and Mother Martta; his wife, Katherine and infant daughter, Karen at Sunnyside Cemetery in Kingfield. A celebration of life will be announced when the Pandemic is over.
In lieu of flowers contributions can be made to Webster Free Library in Kingfield, or the Finnish Farmers Club in Monson, Maine. Cremation care has been provided by the Wiles Remembrance Center:Adams~McFarlane Chapel, 137 Farmington Falls Road, Farmington. Memories may be shared in his Book of Memories at www.wilesrc.com.