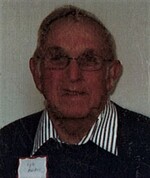 Farmington - Lyle Evans Karkos, 85, of Farmington, formerly of Temple, died early Wednesday evening surrounded by his family at Franklin Memorial Hospital in Farmington. He was born in Farmington, July 13, 1935, the son of Merton L. and Bertha (Farrington) Karkos and was a member of the Wilton Academy Class of 1954. On Jan. 2, 1954, he married Gail Adams in Wilton. They made their home in Temple for many years and owned and operated Karkos Service Station in Farmington at several locations in the community for 37 years. After his retirement, he volunteered at Franklin Memorial Hospital for 16 years, serving as a valet parking attendant. Lyle was an outdoorsman, who enjoyed snowmobiling, four-wheeling, and especially hunting. He and his boys spent a lot of time together at the family hunting camp in Temple. He was a member of Maine Masonic Lodge #20 AF and AM of Farmington and was one of the founding members of the Farmington Elks Club.
He is survived by his wife of 67 years, Gail of Farmington; sons, Richard and his wife, Donna of Topsham, Bruce and his wife, Sherie of Farmington, and Jon and his wife, Teresa of Temple; grandchildren, Sandra Powers and her husband, Ron of New Sharon, Kimberly Judkins and her husband, Garrett of Chesterville, Jonathan Karkos and his wife, Melissa of Rome, Paul Karkos and his wife, Danielle of New Vineyard, Richard Karkos and his friend, Nikki of Farmington, Kelsey Karkos and friend Kyle of Steamboat Springs, CO, Kayla Karkos of Temple, and Nicholas Karkos and his fiancé` Caihlan Snyder of Scarborough; 2 step-grandchildren, Amy Lazaro and her husband Ryan of Concord, NH and Alecia Wolfe and her husband, Arron of Oakland; 14 great grandchildren; several nieces and nephews; Daughter-in-law, Joanne Karkos of East Dixfield; sisters-in-law, Donna Cunliffe of Skowhegan and Shirleen Dolder and her husband, Bob of Exeter, NH; He was predeceased by his beloved son, Paul in 2005; his parents; in-laws, Harland and Jeannette Adams; brother-in-law, Dennis Adams and his wife, Susan; and brother-in-law, Eric Cunliffe.
Public graveside memorial services will be held at Lakeview Cemetery, Wilton, in the late spring or early summer after Covid-19 subsides and will be announced. The family asks that those who desire, consider memorial gifts in his memory to Franklin Memorial Hospital, 111 Franklin Health Commons, Farmington, ME 04938. Please share your memories and kind thoughts in his Book of Memories at www.wilesrc.com. Cremation care and memorial services are being cared for and provided by the Wiles Remembrance Center:Adams~McFarlane Chapel, 137 Farmington Falls Road, Farmington.