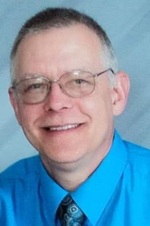 Leonard J. Davis, 60, of Jay passed away at home peacefully after a long illness. Leonard was born in 1960 to Joseph and Mary (Ryder) Davis and was raised in Baltimore, Maryland. He later moved in with his beloved aunt Ida Perkins in Ripley, Maine where he attended and graduated from Dexter High School in 1978. He later met the love of his life Althea Davis and they married in 1982. They settled and raised their children in Lisbon Falls.

Leonard always worked in woolen mills where he was known as the “loom guy” and always loved to pass on his knowledge to the next generation. He designed many blankets and bed spreads, worked and fixed all the looms at Bates of Maine, Heritage Weavers and Maine Woolen. He then went on to help Origin establish the manufacturing of their products on the looms he started his career on.
He was loved by everyone that knew him. He was always willing to help. He loved hunting and fishing with his best friend Dave Watson. He loved spending time with his children and grandchildren. He also enjoyed time on his boat with his wife. He was never one to sit still; he always found something to do outside like gardening and raising chickens. Leonard was always up for a good adventure.

Leonard is survived by his wife of almost 40 years Althea of Jay, his daughters Amanda Leclerc and her husband Corey of Jay, Samantha McCoy and her husband Ken of Honolulu, HI and a son Jason, his beloved grandchildren Logan, Tateum, Kaitlyn, Connor, Taylor and Damian, his brothers Joseph Davis of Baltimore and William Davis of Florida and many aunts, uncles, nieces, nephews and cousins.
Leonard is preceded by his parents, his beloved sister Debbie Green, nephew Marc Green and many aunts and uncles.

Visitation will be held from 2:00 – 4:00PM on Friday Jan. 1, 2021 at Wiles Remembrance Center 137 Farmington Falls Rd. Farmington. Social distancing and masking will be required. A private funeral service will be held at a later date. Interment will be at Pine Grove Cemetery in Canton in the spring. Donations may be made in his memory to the Leonard Davis Textile Scholarship C/o Franklin Savings Bank, P.O.Box 825 Farmington, ME 04938. A kind word may be left in his Book of Memories at www.wilesrc.com