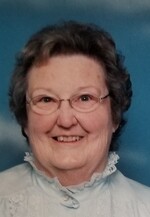 Belfast - Judith Ilene "Judy" Lane, 82, of North Jay, died early Tuesday morning at Waldo County General Hospital. She was born in Massachusetts, July 31, 1938, a daughter of Reginald H. and Bertha G. (Ridley) Mosher and received her education in Jay schools and the Maine Medical Center School of Nursing. On Aug. 1, 1959, she married Raymond Louis Lane. He died April 26, 2016. Mrs. Lane worked as a nurse in the OB unit at Franklin Memorial Hospital in Farmington for her entire career. She was named a Grammarian, being proficient in grammar and in 1990 was named to the Who's Who in Nursing.
Mrs. Lane and her husband, enjoyed traveling all over the United States and she had a collection of spoons and shot glasses from all of their travels. She loved her family and enjoyed sewing, knitting, dolls, and making quilts and baskets. She was a Gold Star Mother, having lost a son, Randall "Randy" Lane on Dec. 12, 1985 in a plane crash in Newfoundland, returning from a peace-keeping mission in Beirut, and she was a long-time member of the Farmington Emblem Club.
She is survived by her sons, Raymond Lane, Jr. and his wife, Janet of Glenburn and Reggie Lane and his long-time companion, Rose Smith of Jay; her "6-pack" of granddaughters, Kimberly Nadeau, Nicole Amero, Athena Lavigne, Kristen Lane, Randi lane, and Amanda Lane; 12 great-grandchildren; several nieces and nephews; In addition to her husband and son, she was predeceased by two sisters, Marilyn Cook and Linda Therrien.
Relatives and friends are invited to call at the Wiles Remembrance Center: Adams~McFarlane Chapel, 137 Farmington Falls Road, Farmington on Saturday, Jan. 16, 2021 from 12 noon to 2 pm where the use of masks and social distancing will be observed with limitations of no more than 50 at the facility at any one-point in time. Farmington Emblem Club will close the visitation with a memorial service. You may RSVP your attendance as well as share memories in her Book of Memories at www.wilesrc.com. Public graveside services will be held on Saturday, May 15 at 11 am at Birchland Cemetery in North Jay. The family asks that those who desire consider memorial gifts in her memory to the Randy Lane Scholarship Fund, c/o Mavis Lane, 390 Keep Road, Jay, ME 04239.