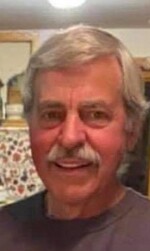 Augusta - John Guy Dube, 74, of Eustis, died early Thursday morning at the Alfond Center for Health, Maine General Medical Center in Augusta. He was born in Farmington, Oct. 6, 1946, a son of Honore and Alma (Brault) Dube. John served as an altar boy at St. John's Catholic Church in Stratton while growing up locally. He was a veteran of the United States Army, being a member of the Green Beret's and served in Vietnam during the Vietnam Conflict. On Oct. 8, 1994, he married Laurel Bottiggi on Eustis Ridge. He vowed to be a father to "our" three girls and he honored those vows to the very end. John had hands that wore down a wedding band to symbolize his love for his wife; hands that were patient and kind; hands that wrapped his girls up in a bear hug more times than could be counted.
Mr. Dube was an owner of Comeau-Dube Builder's Inc., crafting many fine homes in the Sugarloaf region over the years. He was a hard-worker dedicated to his profession. What he enjoyed most though, was his land and all of the wholesome activities he was known for such as his love of hunting and fishing, his knack with organic gardening, and sapping the trees to gift friends and family with Maine made maple syrup. When he wasn't outside enjoying himself, he could be found inside making something good to eat and telling stories of all his ski trips, bar visits, and travels out west. He was a member of the VFW and Mt. Bigelow Masonic Lodge #202 of Stratton. John was a wonderful man, loyal, and always willing to stand up for what he felt was right. He was loved by many, and will always be missed.
He is survived by his wife, Laurel of Eustis; daughters, Samantha Cote of Eustis, Michayla Griffin of Lewiston, and Mercedes Freeman of Eustis; their "other children", Steve and Vanessa Smith of Farmington, Kathi Smith and Sam Donald of Ellsworth; 6 sisters, Cecile Como of Lewiston, Lucille and (Bo) Merrill Gatchell of Nobleboro, Fernande Murphy of Westbrook, Monique and Harry Hamlin of Windham, Hugette and John Carter of Georgia, and Armandine (Deano)Dube of Stratton; brothers, Marcel and Cindy Dube of CA, Norman Dube of Eustis, and Mark and Donna Dube of OH; 3 grandchildren, Devlin, Dean, and Nashoba; and a "grand puppy" Clover; and "other grandchildren", James and Maya; He had a plethora of nieces and nephews and grand nieces and nephews who were his favorites, "y'all know who you are." He was predeceased by 2 brothers, Leo and Claude, who will greet him for his spirit journey.
Memorial services will be held in the summer of 2021 after the current Covid-19 pandemic subsides. The family asks that those who desire consider memorial gifts in his memory to St. Jude's Children's Hospital, 501 St. Jude Place, Memphis, TN 38105 or to stjude.org. Family and friends are invited to share photos and memories in his Book of Memories at www.wilesrc.com. Cremation care has been cared for and provided by the Wiles Remembrance Center: Adams~McFarlane Chapel, 137 Farmington Falls Road, Farmington.