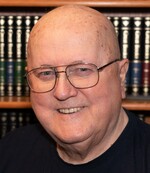 Temple - Jack H. Hoyt, 83, of Temple, died early Tuesday morning at his home surrounded by his family. He was born in Elliot, ME, July 3, 1937, a son of John and Helen (Dana) Hoyt and received his education in local schools. He was a veteran of the United States Navy, having served during the Korean Conflict on the USS Robinson. On May 20, 1962, he married Sandra "Sandy" Buzzell at the Portland Street Baptist Church in Haverhill, MA. After the birth of their third child, they moved to Maine where he worked at Maine Dowel in Farmington He then became a papermaker, working at International Paper Co. for 33 years, where he was a member of the Quarter-Century Club. After his retirement, he worked part-time at RSU 9 as security and a custodian.
He was a long-time active member of Trinity United Methodist Church where he served as a Sunday school teacher as well as many other positions in the Church over the years. He was passionate about guns and hunting and was successful in getting bear, deer, and moose over the years. Jack was very proud of the fact that he learned to fly and held a private pilot’s license.
He is loved by his wife, Sandra "Sandy" of Temple; son, Jack Hoyt, Jr. and his wife, Valerie of Industry, daughter, Tammy Lequillo and her fiancé, James Scaffidi of Franklin, MA, daughter, Melissa Clark and her husband, Richard of Woodbridge, VA, and son, Randy Hoyt and his wife, Bethany of Wilton; grandchildren, Allyson Hoyt Blais and her husband, Dan, Eric Lequillo and his wife, Jessica, Alex Lequillo and his fiancé, Kelsey Manion, Andrew Clark, Jacob Clark and Natalie Clark, Jordan Hoyt, Derek Hoyt and Devon Hoyt; two great granddaughters, Aria Blais, and Mila Lequillo; sisters, Marjorie Savage of West Farmington and Eva Say of CT. He was predeceased by three brothers, Dana Hoyt, Walter Hoyt, and William Hoyt; and four sisters, Hazel Barker, Louise Nicholas, Lila Kane, and Myrtle Haney.
Jack's family would like to thank Susan Bailey and Androscoggin Home Health Care and Hospice for their loving care during his journey.
A Celebration of his Life will be held from Trinity United Methodist Church in the late spring/early summer of 2021. The family asks that in lieu of flowers, memorial donations be considered in his memory to Trinity United Methodist Church, 612 Farmington Falls Road, Farmington, ME 04938, or to St. Jude's Children's Hospitals, PO Box 1893, Memphis, TN 38101-9950, or online at stjude.org. Memories may be shared in his Book of Memories at www.wilesrc.com. Cremation care has been cared for and provided by the Wiles Remembrance Center, 137 Farmington Falls Road, Farmington.
When Jack was asked how he wanted to be remembered he responded with “that I love God and I love Sandra.”