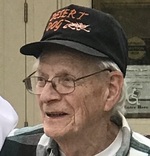 Frederick C. French, 90, of Jay Maine, formerly of North Tonawanda, NY passed away at his home on September 14, 2020. He was born in Andover Maine on June 9, 1930, the son of Frederick and Louise (Morgan) French. As a child, he returned to Maine each summer, working on his Grandfather's farm in Andover, providing him with great memories and funny stories he would cherish. He graduated NTHS Class of 1949, and spent time in the US Navy before starting a career at International Paper Company in New York. On June 7, 1966 he married Elizabeth (Betty) Korthals and they raised 4 children, Robert, Barbara, Fred and Bill. In 1977 he relocated to Maine, retiring from International Paper as a mechanical engineer. A self-taught handyman and lifelong Buffalo Bills fan, Fred was the go to guy for any project, and could repair anything. He also enjoyed visiting his cousins, Aunts and Uncles in Andover, and was proud he had not missed a NTHS class reunion since 1999. He enjoyed travel, spending time with his black lab "Daisy", or just relaxing around a campfire reminiscing. His sense of humor, smile, and calm demeanor will be greatly missed. After his wife passed in 2003, He would say she had told him he would be around as long as there was "work to be done" down here. Well there's still work to be done, however, they must have decided "Pops" needed to rest.
He is survived by sons Frederick and Bill French of Jay, daughter Barbara (Joseph) Daniels of Niagara Falls, grandchildren Will, Emily, Lisa, Renee, and John, 7 great grandchildren, as well as many in-laws, nieces and nephews. He is predeceased by his wife Betty, son Robert Taylor, and sisters Deanna Lindahl, Gloria Koithan, and Arlene Miller.
Cremation cared for by Wiles Remembrance Center 308 Franklin Road, Jay. Interment will take place at Mt. Olivet Cemetery in Tonawanda, NY at a later date. Donations may be made in Fred's memory to the Andover Maine Historical Society, PO Box 268 Andover, Maine 04216. A kind word may be left in his book of memories at www.wilesrc.com