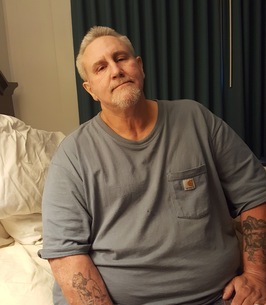 Auburn – David Paul Rocheleau, 66, of Livermore Falls, died at the Hospice House in Auburn on July 21, 2022.
He was born on March 17, 1956 in Burlington, Vt. And was raised by his mother Joanne (Ockert) Rocheleau and his step-dad, Mark Rocheleau. He was educated in Maine schools and in his younger years enjoyed his involvement with a variety of motorcycle clubs. He later worked for a number of years at a Bethel Dairy farm.
Fifteen years ago, he met and married his sweetheart, Mary Norton.
David was a true craftsman. He enjoyed building model ships and tying intricate knots with great precision…he had a sharp eye for details. He also enjoyed spending time outdoors, particularly if it involved fishing.
He will be missed, but his family and close friends are grateful that he is at peace.
He is loved by his wife, Mary, of Livermore Falls; step-children: Brian Hume of NC and Samantha Hume of Waterboro, ME. And Tina of NH; a sister, Mary Jane “DeDe” Poulin and her husband, Mike, of Vt. ; his Siamese cat, Teddy and chihuahua dog, Turbo.
He was predeceased by an infant son, Zachary Rocheleau.
His family suggests that remembrance gifts be given to the brain injury charity of your choice. You are invited to visit his memorial wall in his Book of Memories at www.wilesrc.com. Cremation care has been provided by the Wiles remembrance Centers of Farmington and Jay.