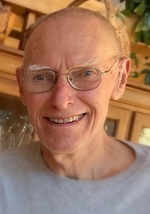 Bart J. Hersey, 74, of Wilton, passed away on April 1, 2021 at the Androscoggin Hospice House in Auburn due to complications from bladder cancer treatments. Bart was born to Paul and Mary Hersey in Beverly, MA. He was raised in Nashua, NH and graduated from Nashua High School and later attended Grove City College in Grove City PA. He was a member of the US Marine Corps. In May 1975, he married Janalyn Sampson and together they raised two children, Moriah and Erik. Bart was instrumental in starting the New Balance factories in Skowhegan and Norridgewock. In 1982 he started his own business – Hersey Custom Shoe Company. He was known for his gardens, love of the natural world, and privacy.
He is survived by his wife of 45 years Janalyn, his daughter Moriah and son Erik. Grandchildren Dylan and Carter Grant, and Mason and Morgan Hersey. His sister Carole and her companion Larry of West Chesterfield, MA, brothers Michael and his wife Beverly of N. Wilkesboro, NC and John and his wife Beverly of Fountain Hills, AZ.
Cremation cared for by Wiles Remembrance Center: Adams-McFarlane Chapel 137 Farmington Falls Rd. Farmington. Donations may be made in his memory to the Wilton Free Public Library, P.O. Box 454, Wilton, ME 04294. A kind word may be left in his Book of Memories at www.wilesrc.com