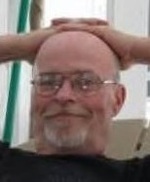 Alfred Joseph Collard Jr., 72, of Chesterville passed away at home of natural causes. Al was born in Woonsocket, RI on May 3rd, 1948 to Alfred and Marguerite (Metivier) Collard Sr. He attended Lincoln Jr. & Sr. High school and served four years in the United States Navy. Prior to enlisting in the Navy, Al grew up in the small mill towns of Albion and Manville, RI. In those days, everyone had a nickname. Al was known to his immediate family as “ti Fred” and better known to his peers as “Kookie” borrowing that moniker from the character on 77 Sunset Strip.
Al was proud of his service in the Navy having spent his entire enlistment aboard the “The Fighting Lady” U.S.S. Yorktown. His service included numerous deployments at sea as well as a tour off the coast of Viet Nam. His chosen profession after leaving the Navy was working in the construction trade as a union lather in California. In his younger days living in CA, Al devoted many hours to the sport of motocross. With a sparkle in his eye, he would often speak of his days “wrenching” on a pit crew for a professional team competing at races across the country.
For some reason only known to him and the Lord, Al chose to root for the New York Yankees over the Boston Red Sox. But we loved him anyway, after all he was our “big brother” and we will miss him. He was also an ardent supporter of Notre Dame’s Fighting Irish football team.
After retiring, Al moved back east settling in Maine. His summer days were filled with riding his Harley, playing golf every chance he could and caring for his chocolate lab “Macie”. His winter days were spent playing online poker (for fun of course) and waiting for summer.
Al is survived by his brothers Raymond (Iris) of PA, Richard (Josefa) of NC, Gerard of RI and his sister Anne Marie (Jay) of CT. Also surviving are numerous nieces, nephews, grands & greats. In addition to his parents, he was predeceased by a son Joseph, a brother Robert and most recently his beloved pet “Macie”

Arrangements are cared for by Wiles Funeral Remembrance Center: Adams-McFarlane Chapel 137 Farmington Falls Rd. Farmington. . Private services will held a later date. Donations may be given in Al’s memory to Franklin County Animal Shelter, 550 Industry Rd. Farmington, ME 04938. A kind word may be left in his Book of Memories at www.wilesrc.com